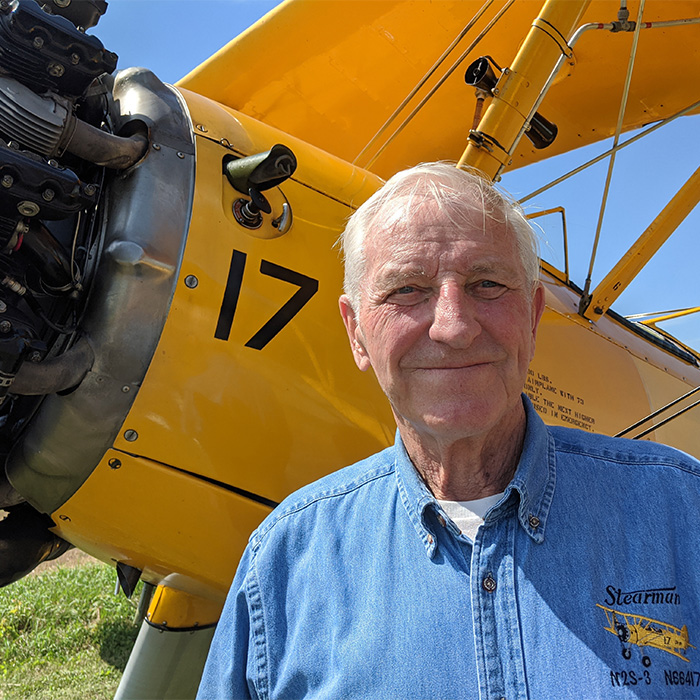 Tom is the co-founder of the National Stearman Fly-In. The Fly-In was the idea of Jim Leahy, a Galesburg,Illinois resident, and with Tom’s assistance, the 1st National Stearman Fly-In was held September 15-17, 1972. 27 Stearmans attended that first year. He has served as a Director on the Board of Directors since its inception and has filled every officer position except for Treasurer. Tom was President of the Stearman Restorers Association serving 20 years from 1970 to 1990. He has served as a National Director of the Antique Airplane Association for many years. He retired from United Airlines as a B-747 Captain after a 33-year career. He was inducted into the Illinois Aviation Hall of Fame in 2009 and was presented the FAA Wright Brothers Master Pilot Award in 2014. Tom owns 2 Stearmans, a 1942 N2S-3, N66417, the co-founding Stearman of the NSFI, lovingly referred to as “Number 17”. He has owned it for over 50 years and it has been restored twice by him and his wife, Nancy. Tom also owns a 1931 square-tail Stearman Model C3R that he and Nancy spent over 6 years restoring which was recognized as the Antique Airplane Association’s 1985 Grand Champion.Their fleet also includes an 85 h.p. Aeronca 7DC Champ. Tom and Nancy live in Crystal Lake, Illinois.