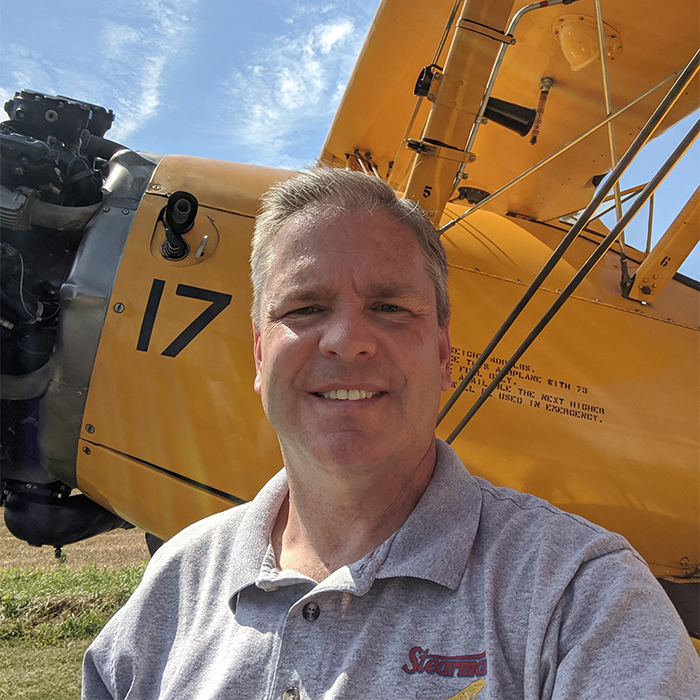 Mike Lowe didn't have to look very far to find his inspiration in aviation.  His earliest memories revolve around family gatherings at Dacy Airport where he rode on his mother's lap in "Good Ol' #17" while being piloted by his father.  In addition to riding in antique airplanes he shared the family's living room with much of the Stearman C3R being restored by his parents throughout his childhood.

Mike started flying in an Aeronca Champ at the age of 13.  He soloed in a glider at 14, soloed on his 16th birthday in the Champ, and received his Private License at 17.  He enjoys flying the family's Navy N2S-3 Stearman, Stearman C3R "Business Speedster"(square tail) and Aeronca Champ.

Mike has been a National Stearman Fly-In board member since 2000.  His responsibilities include running the Short Field Take Off,Rescue Drop (flour bombing), and Accuracy Landing contests; Stearman aircraft judging, and the awards presentation at the Saturday night banquet.  He attended the fly-in as a young child until elementary school age.  After starting Jr high school in 1985 he persuaded his parents to allow him to come and he hasn't missed a year since!

Mike lives in Lake In The Hills, Illinois with his wife,Nina and their three children.  He flies the Airbus A319/A320 for United Airlines.